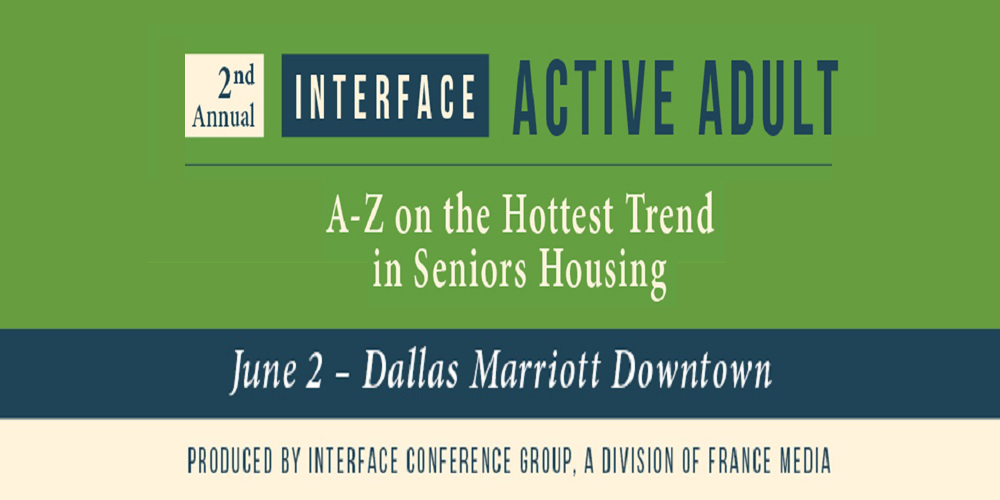 The 2nd Annual Interface Active Adult Conference with the theme "A-Z on the Hottest Trend in Seniors Housing is planned for June 2, 2022 at the Dallas Marriott Downtown. Seniors Housing Business magazine and the InterFace Conference Group will host the event which will feature top executives as speakers including Jane Arthur Roslovic, CEO & Co-Founder of Treplus Communities, Zach Crowe of The Carlyle Group, Frankie Pane of Essex Communities, and Jeff Arnold of The United Group of Companies.  This is the industry's second conference devoted entirely to the active adult /55+ niche which is the largest and fastest growing segment in today's renter landscape and will likely remain as such for the next two decades.This exciting, one-and-a-half day conference will bring together the leading players in the burgeoning active adult/55+ segment, which includes seniors housing owners, operators, investors and developers active in this space. The event will combine high-level education and market information along with networking opportunities.

For more information about this event, please click here.

Jane has been in the real estate development and investment business as a managing member of Treplus Communities since 2012. Jane and her partners have acquired multifamily units, developed, and built 6 Active Adult Communities in Dublin, Pickerington, Delaware, Centerville, Grove City and Westerville. They have raised the equity and secured $120+ million in financing. Treplus Communities was awarded the Gold 2019 NAHB Best 55+ Market Rate Rental Community, the Silver NAHB Innovation Award in 2020 and 2021 The Best of 55+ Housing Award. In 2019, Treplus was the CBUS Top Picks for Best 55+ Apartments.  Some of the conferences she has spoken nationally on Active Adult Housing include ULI LRDC 55+, HealthTAC, Interface Active Adult, SL100, SHN Active Adult Conference.

Jane has served on the board of Broad Street Financial Company since 2007.  She also serves on the Board of Trustees and the Executive Committee for the Central Ohio BIA. She is the incoming President for 2023.   She is a member of the ULI LRDC 55+ Council, the 55+ NAHB Housing Industry Council Board of Trustees. Jane is a member of Women Presidents Organization Local and Platinum Chapter VIII.

Jane started her career in 1987, developing and managing condominiums, multifamily apartments, and a single-family development. In addition, Jane acquired, managed, increased the value of and subsequently sold a manufacturing business. She has served on the Boards of Trustees for the following Central Ohio organizations: Columbus School for Girls, Urban Growth, Franklin Park Conservatory and the Charles Kleibacker Fund at The Columbus Museum of Art. Education: Southern Methodist University, 1984. Jane has 2 children that are launched in their careers and are currently living in Los Angeles and Columbus.