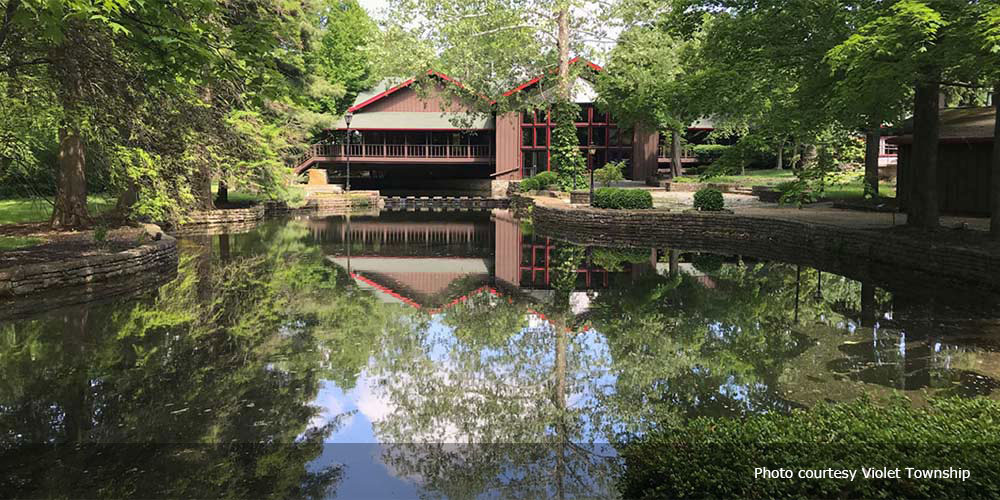 Wigwam Theatre Has a Permanent Home, Is a New Entertainment Option for Residents of Senior Apartments

Redbud Commons senior apartments in Pickerington is close to a number of community amenities, convenient for the residents of our luxury apartments. Now area seniors and families can enjoy (and participate in) live theater on a beautiful historic property in Violet Township. The Wigwam Theater, on the site of the Wigwam Lodge formerly owned by the Wolfe family, is the new home to the Pickerington Community Theater (PCT) company, which was without a home base until last year. In June 2018, Violet Township purchased the historic Wigwam Lodge property from Wolfe Enterprises for $2.7 million. Enjoyed for generations by the Wolfe family for generations, the family getaway at State Route 204 and Taylor Road includes the 303-seat Wigwam Theater, a 400-seat banquet hall, a swimming pool and over 40 acres of wooded land. Wolfe Enterprises is a business extension of the powerful newspaper family that owned the Columbus Dispatch until 2015. Family patriarchs purchased the initial 20 acres of the property in 1927.

Central Ohio members of the Church of Latter-Day Saints performed “A Night of Broadway” February 22 and 23 before audiences in the Wigwam’s 303-seat theater, marking the first event to be held at the historic compound since it was purchased.

Family member Lucy Wolfe told This Week News, the suburban weekly publication of the Columbus Dispatch, that she was happy about the sale of the property to Violet Township. ‘I think they should try to preserve it…I was not in favor of selling it to a big developer and cutting it up for houses… almost every Wolfe child had a birthday party out there at one point when they were little.’  She recalled that Wigwam employees used to butcher and smoke meat at the lodge, which was often used for hunting by Wolfe family members and employees.

Ms. Wolfe told This Week News that she hopes the township continues to display historic memorabilia from the property, and host ‘historic tours’ there. Lucy Wolfe is a local realtor and photographer of a book on Columbus history, "A Historical Guidebook to Old Columbus."

Violet Township has big plans for the property, but the majority of its wooded areas will be preserved. Violet Township will move its offices to the site later this spring, and the Pickerington Community Theatre has its first permanent home at the Wigwam Theater. The nonprofit performing arts troupe offers four main stage productions each year, an annual variety show, traveling comedy troupe and other events. Pickerington Community Theatre is currently presenting its Spring 2019 production of Magic Tree House: The Knight at Dawn KIDS!

PCT held auditions on April 26th and 27th for its Summer 2019 performance of Monty Python’s Spamalot! Performances will be held at the Wigwam Theater at 10190 Blacklick-Eastern Road NW from July 12 to July 21. Audition, rehearsal and performance information can be found at PCT’s website.

The Wigwam Lodge: Rich in History, Full of Potential

During its heydey from the 1940s through the 1980s, he 63-acre property was a gathering place for the Wolfe family and their influential friends. The family threw lavish events there, hosting Hollywood celebrities such as Bob Hope, Jimmy Stewart and Gene Autry as well as prominent conservative politicians including four-term governor James A. Rhodes.  Wolfe family patriarchs, brothers Robert and Harry, were major Republican party donors, and the tradition of giving to conservative causes has remained a mainstay of the Wolfe family legacy. The Wigwam Lodge's event facilities also include a 400-seat banquet hall with dance floor, meeting rooms, a fully equipped commercial kitchen and a swimming pool. While the banquet hall and kitchen will be put to use hosting public events, corporate conferences, and private parties including weddings, the swimming pool will be paved over to create a large outdoor patio. The sale of the facility included not only the buildings and land, but equipment, furniture and dinnerware, among other articles. Upcoming events include:

This levy would allow the township to finance the construction of a $46 million community center over a 25-year period and provide $2 million annually for operations along with $210,000 for annual capital replacement.  The details of the proposed community center, including preliminary first and second floor plans and site diagrams, can be found on the Violet Township website.

Wigwam of the Future

In the near-term, Violet Township will complete nearly $1 million in renovations to the property, including updates and replacement of infrastructure and technology, installation of energy efficient lighting and addition of Universal Design features to entrances and restrooms to accommodate handicapped individuals.

Renovations are being conducted in stages, and the township plans to move its offices into the facility sometime during the second quarter of 2019. The current township office, located a mile south of the lodge at 12970 Rustic Drive, will be leased as commercial space.

Long-range plans for The Wigwam include developing a 10-acre commercial site on the north side of the property. This parcel has visibility from Interstate 70 and frontage along Taylor Road. The wooded areas surrounding the lodge compound will be preserved and maintained by township staff.

The historic retreat will likely be given another name in the future, something that reflects its location in Violet Township as well as maintaining the word Wigwam, its original moniker. The facility is currently being rented to the public for recitals, dances, weddings, meetings and other events. Rental rates for The Wigwam Lodge banquet hall and The Wigwam Theatre are available for 2019 and 2020 on the township’s website. Discounted rates apply for charitable organizations and local residents.

The residents of Redbud Commons senior apartments will benefit from that luxury apartment project's proximity to Wigwam Theatre. There will be many productions at that venue in the future for the 55+ active adult community will have ample opportunities to get involved in local theater in the future. Treplus Communities chooses its locations so its residents will be close to a variety of community amenities. Our senior apartments in Pickerington are located just 3.0 miles south of the Wigwam Lodge and Theater, within easy driving, walking or biking distance.